A Grower-Producer Market in Terre Haute 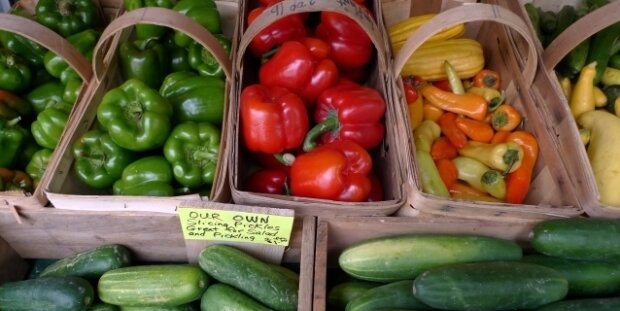 A handful of roadside stands with folks selling fresh, local produce line the Haythorne Avenue block in North Terre Haute. The signs aimed at diverting you to the stands range from a tiny piece of cardboard bent in half, to a professionally made vinyl sign. There is a common theme among many of the front yard entrepreneurs; the green thumb has been passed down generation after generation.

A wooden post stands in front of a field off Haythorne. Hanging from the post are slabs of wood connected by a tiny chain. Each slab of wood lists a vegetable name. If you meander beyond the cornfield, you will most likely find Carl Cooper tinkering in his garage or sitting in a thatched chair under the shade of a tree, passing time until a customer pulls up to buy produce.

Carl has been gardening for more than 20 years. He describes his garden (three-fourths of an acre) as a truck patch. The rows are filled with enough vegetables to feed a small army. While the techniques of gardening have stayed the same, the customer has changed in more ways than one. Folks today are used to the hot house, gassed tomatoes trucked in from thousands of miles away. They are perfect in color and size, yet their taste makes it shameful to call them a tomato.

“A lot of people come to buy my garden tomatoes. They are not like the perfect tomatoes one can buy in the store. I tell people, if it has a blemish on it, it is not bad. It is just the way nature takes care of it. They will pick up every tomato on the table to find one without a blemish,” he said.

Right next to his produce stand is a steel mail box. The box lip is locked shut. On top, a slit was welded for folks to drop their money in for produce. Carl says his old mailbox does not get much use these days. He attributes it to people carrying around “big money,” large dollar bills, too large to break to buy four cucumbers for a dollar. Back in the day, his whole produce stand used to be run on the honor system, which would leave him free to weed the garden.

“Sometimes if you ain’t watching they will take what they want and go down the road,” he said.

The field behind Carl’s house used to be seeded for sweet corn; he has since transferred it to feed corn. He would be willing to change it to a specific crop to help supply a niche in the local food economy, if needed.

On the other side of Carl’s field of corn lives Ted Cooper. The two share no relation, except their skill for self-reliance. For as long as Ted can remember, his parents had a roadside vegetable stand. It has been a while since he has had a stand of his own, but this year he found himself with a lot of excess produce that his family could not preserve. Ted bases his prices off what others mark theirs as and tries to either match or goes lower than what grocery chains advertise. As folks hop from one roadside stand to another, their first question always seems to remain the same.

“‘Did you grow it yourself?’  I say, ‘Yes, my plants and my weeds are doing just fine in the backyard,’” Ted said jokingly.

It is important for Ted and his family that they spend less at the store. He says he preserves enough food to last all winter and to get through any slumps in the economy. He remembers, growing up, the garden excess would also help supply local restaurants.

“There were two or three restaurants who would buy off of us, small restaurants, not big restaurants. We kept them supplied all week, even all summer long,” he said.

The new kid on the block

Jason Farrand had a garden at his parents’ house growing up. Now as a college student, he is studying agriculture at Ivy Tech. You can tell by his eagerness that he is ready to sell. He has signs dotting from when you exit Mendard’s to the west to every other corner in his neighborhood advertising his roadside stand.

“I just realized you could get in and supply a lot of people and you could make money doing it too. You can produce anywhere from 10 to 70 pounds per plant, if you take care of them right,” he said.

He started selling last year in front of his house, and this will be his first month having a booth at the Terre Haute Farmers Market. “It is definitely worth the money to pay to have a booth at the farmers market. You do make your [money] back, if you have a lot of plants. Plus, you get to meet people, network with them and tell them where you are located,” he said.

For the typical backyard gardener, the cost of a booth at a local farmers market can really eat into the profit margin. Majel Wells, the market master for the Terre Haute Farmers Market says the market is more than selling excess produce; it is also the comradery among other vendors and the customers. Wells recommends vendors to find their niche and scale up to make a bigger profit.

Additionally, Jason says it would be helpful to the everyday consumer if there were a map available showing consumers where all roadside stands are located. Down the road, he envisions having a greenhouse, so he can provide even more local produce.

It is hard to miss Josh Lloyd’s sign off Haythorne. It’s large and vinyl and reads: “Vegetables.” Josh has been gardening only for a few years. He made the decisions to jump in big when he didn’t want to mow his large yard. He admits his logic didn’t work for having less labor, but at least now he can supply folks with fresh food. Growing up, he remembers that his parents would have a produce stand, except they would buy their produce at an Amish auction and resell it.

“I thought if I could grow it, I could cut out the middle man. It is a lot more work, but at least we know where the food is coming from,” he said.

Separate from Josh’s already immense garden at his home, he is now growing 10 acres of food elsewhere. He leases out two plots of land in Terre Haute and one in Parke County. His vision is to expand to 50 acres and grow food as a full-time job and sell to restaurants and stores exclusively. In the meantime, he off-loads the food he does grow onto websites like on Craig’slist, Hoosier Topics, by word of mouth and by passing out business cards at his booth at the Terre Haute Farmers Market.

For those new to the roadside stand business, local markets are a great way to make a some extra money on the side. In Terre Haute, each vendor must go through an approval process  to have a booth. Officials want to ensure that when customers buy produce at the market they are getting it from the people who grow it. Wells goes out on farm visits to see that every vendor is actually growing where they say they are.

Be a Bee Lover…Your Food Supply Depends on Them

Posted On 10th October 2014
Most of us have heard about the problem of bee die-off, or colony collapse. But, do we understand what is happening and why it is

Posted On 11th September 2013
Article Courtesy of The Indy Chamber Energizing Indiana continues to increase its support of Hoosier communities by giving nonprofits, like the Indy Chamber, the opportunity

Posted On 28th April 2014
As I sit here transcribing the interviews for this article, I hear a local TV commercial on in the background advertising water safety test kits