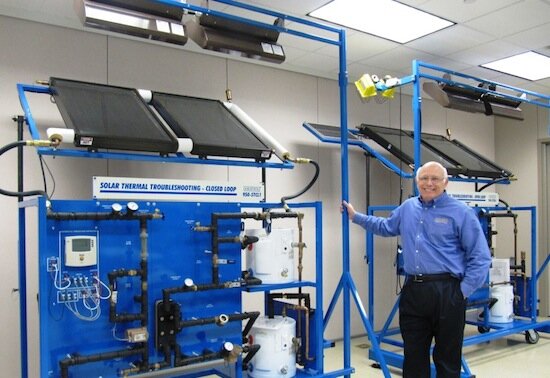 Although Amatrol has been educating for technical skills since 1981, its green energy program is relatively new, beginning in 2010, the same year it was named Small Business of the Year by both the Indiana Chamber of Commerce and Louisville’s Business First. The company was approached by a manufacturer called Clipper Windpower, who needed skilled workers and wanted to see growth in the wind power industry overall. After developing training in with utility-scale wind technology, Amatrol then moved to large-scale solar, and finally residential solar, both photovoltaic and thermal.

In the U.S., Amatrol trains teachers in universities, community colleges, high schools, and vocational schools (including Ivy Tech in Indiana and the Kentucky Community and Technical College System), offering both curriculum and equipment. Amatrol’s vice president of sales Joe Reid explains that there are 600,000 manufacturing jobs unfilled in the U.S. because of lack of work force training for today’s jobs.

Many nations are ahead of the U.S. in green energy. European countries, for instance, lacking our abundant fossil fuels, are forced to be more innovative. While large-scale wind power operations dominate and the U.S. and Canada, solar technology is more popular in locations where smaller-scale operations are needed. The cost-effectiveness of both technologies continues to improve steadily, but Reid predicted that geothermal’s popularity may overtake them both.

In the U.S., utility-scale wind technology is limited not only by lack of trained technicians but also by an electrical grid that is inadequate to handle all that wind farms can provide it, as well as by a tendency to build only when tax credits are available. This means jobs come and go depending on the way the wind blows, so to speak, in Washington. It is not yet clear what the smart grid will look like; therefore, it isn’t yet clear what vocational skills will be needed to service it. Mr. Reid said the company hopes to see long-term changes in energy sources over time, with natural gas taking the place of coal as a transitional fuel.

The kinds of green energy jobs for which people will be training will continue to evolve. Amatrol tries to help build into their curriculum the wide-spectrum knowledge and flexibility that will enable workers to evolve alongside ever-developing technology.

Posted On 13th June 2011
Region #4 Location: 484 Ball Drive Hanover, IN 47243, Jefferson County The mission of the Rivers Institute at Hanover College is to promote an understanding