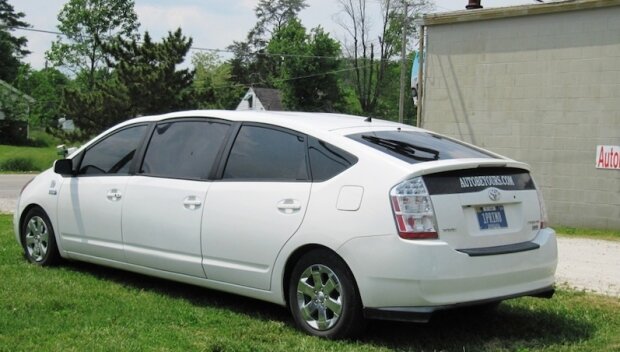 Steve and Jenny Woodruff have been recycling professionally for a long time, first with an electronics repair business. After they bought their first Prius some years ago, their appreciation for this gas-sipping car led them to open a new business in Scottsburg, Indiana.

They provide service for Prius owners, but most of what they do is to buy wrecked Priuses from insurance auction lots and rebuild them for resale. Often, as soon as they come into the shop, the cars are spoken for by buyers eager to find affordable, energy-efficient vehicles.

The Woodruffs specialize in the popular second-generation Priuses made by Toyota between 2004 and 2009. They have recently added the all-electric Nissan Leaf to their business as well. They have put more than 350 Priuses back on the road, 22 of them retrofitted with battery packs that allow them to be recharged and driven 40 miles purely on electricity. Steve developed the 16-killowatt battery pack himself. Though the battery now costs $8800, he expects the price to continue to drop while the technology improves.

The Woodruffs have fun with their Priuses, which they have been driving themselves since 2005. They have created three stretch limos (two white and one red), as well as a couple of “Prucks” (El Camino-style Prius fronts with truck backs), and have even installed a Prius motor in a large fishing boat (“It won’t go fast, but it will troll!”). They draw their parts from their own car cemetery out back, using “everything but the squeal.” In fact, says Steve, “I consider what we do here as recycling—in this case, of automobiles.”

Auto Be Yours has received numerous words of thanks from happy customers across the country, including seventeen family members who now drive Priuses. They were nominated for the 2010 Scottsburg Good Neighbor Award, and received the January 2010 EDGE (Economic Development through Growth and Entrepreneurship) award and recognition from the Indiana General Assembly.

For more information, go to www.autobeyours.com.

A Fresh Look at Irvington

Posted On 20th July 2015
Summer Sunday afternoons in the Irvington neighborhood of Indianapolis are special. Around 10am, tents start popping up all over the northwest corner of Ellenberger Park (5301