Chickens in the City 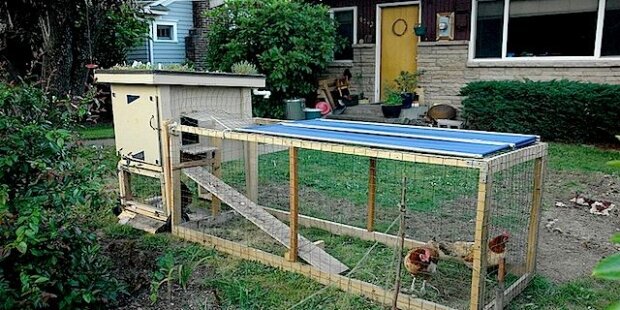 As Americans become more disconnected from the farm, we lose our understanding of where our food comes from. Eating locally and naturally has countless health benefits. To combat the growing epidemic, Champaign, Ill., is in the process of adopting an ordinance that will allow residents to have backyard chickens. Across the state line in Terre Haute, having chickens in an area, unless zoned agricultural, is illegal.

“If a property owner has chickens in the city limits and the property is not properly zoned, the Building Inspection Department typically gives the owner a warning to remove the chickens within a certain time frame,” said Terre Haute city attorney Chou-il Lee. “If the property owner fails to comply, the property owner would be issued a citation to appear in City Court for an ordinance violation. The owner could be fined up to $300 a day, each day the violation continues.”
The backyard chickens discussion came to city officials’ attention in Champaign, when they began working on their first environmental sustainability plan last year. Through the process of developing a plan, they focused on some themes that should be addressed. One of those was local food and agriculture.
Through a series of study groups, it was determined that if they were really going to be serious about the issue, then they should change their ordinance to allow backyard chickens, said Champaign city planner Lacey Rains Lowe. Public support poured out at a city council meetings.

Lowe jokes that she knows more about chickens than she ever wanted to. In order to get to the draft ordinance the city has today, it took finding out what communities across the United States were already doing. Champaign first looked at its current zoning ordinance to figure out what it did and did not want to allow. After some lengthy discussion, the city decided to limit fowl to chickens only.

The City of Champaign knew it didn’t want its regulations to be as relaxed as Lawrence, Kan., which would allow up to 25 birds per lot; therefore Champaign has leaned closer to Evanston, Ill.’s more restrictive ordinance of limiting property owners to four hens. The majority of the research collected came from a query the city put out to the American Planning Association, backyardchickens.com and Madison, Wis., who were pioneers in reinstating backyard chickens more than a decade ago. “Because we are in some ways late to the party, we get to benefit from the experiences that all of these other communities have gone through. In that way, it really benefited us to be late to the party,” Lowe said. In almost every ordinance Champaign city officials looked at, roosters were not allowed, because their crow can be obnoxiously loud, which in turn can cause heaps of noise complaints.

In comparison, hens’ loud clucking, or broadcast clucking, is used by the chickens to alert the flock of potential danger or to mark the arrival of a newly laid egg. Most hens will only broadcast cluck about once per day. If sound is a concern, in comparison, chickens’ decibel levels pale in comparison. A typical human conversation is at 60dB, loud broadcast clucking reaches 70dB, an average dog bark is between 60-100dB and a Harley Davidson Motorcycle ranges between 80-125dB. Chickens are social animals, so many of the codes Champaign reviewed required no fewer than two chickens with a limit of four to six hens. To allow for healthy chickens, the coop can be no smaller than four square feet per chicken, and the run must be eight square feet per chicken. The coop must also be five feet from the property line and 25 feet from neighboring homes, to prevent complaints of coop odors.

“One of the things we would like to include in our code is that the chickens would be allowed to exercise outside of the run, if they are within a fenced back yard, with a fence higher than six feet so they can’t leap out,” Lowe said.

Chickens eat table scraps, therefore reducing the number of pounds of wasted food thrown into the trash and sent into the city sewers via garbage disposal. Hens lay eggs which provide a local source of protein. Chickens are natural pest control agents. They eat unwanted insects and grubs, including mosquitoes, biting flies and Japanese beetles. Chickens will not become a problem for the Humane Society, unlike cats, dogs, rabbitsand all other allowable pets. There is no such thing as a useless chicken, as it can exist as a human’s pet or as dinner.

The wide variety of breeds of chickens provides potential owners the ability to select sizes and temperaments of birds appropriate for any yard or neighborhood.
“A number of the families we have talked to said they are trying to close their loop by producing as much of their food as they can for themselves without adding transportation costs and concerns over factory farms,” Lowe said. In addition, Champaign has found that people are finding it a communal experience. Neighbors are asking to see their chickens, and in the end igniting the neighborly connection once again. Champaign City officials are looking to have the ordinance adopted with enough time for folks to order specialty chicks in the mail before spring hatching season begins.

Posted On 24th July 2013
VALPARAISO - In 2012, Shirley Heinze Land Trust was approached by the Girl Scouts to acquire their former Camp Meadowbrook.  This strategic addition to SHLT’s system of nature

Posted On 24th April 2014
Terre Haute resident Jane Morse remembers ABH in her parent’s garden growing up. She says it was her father’s favorite bush. As an adult when

Recycle glass
If you do not recycle this, it will take a million years to decompose.