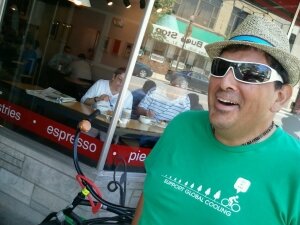 Chuck Ventura of Valparaiso competes in charity running and bicycling events. He is an avid cyclist, involved with Pathways, a local parks department program which promotes non-motorized transportation. He is passionate about the environment, and today, for our lunch meeting he wears a green t-shirt that says “Support Global Cooling” with a picture of a cyclist on it. He wasn’t always this green and healthy though…

Ten years ago, living as a bachelor in Chicago and running the rat race, working in film and video, working 60+ hours a week, he was eating unhealthy food, kept odd hours, didn’t exercise and weighed close to 280 pounds. Some good bicycling friends changed his life by mentoring him on how to bicycle and live healthy. He saw the light seeing people commuting to work by bike, shopping and doing daily errands, all sans cars.

Today, 80 pounds lighter and living in Valparaiso, Chuck frequently can be seen riding his bike around the city’s downtown area. He’d like to help others see the light and make positive change as well. To that end, Chuck donates time doing bike maintenance workshops at several local establishments. He also has some ideas for bike-based events he wants to organize and even a bike-related businesses he’d like to start.

One of his plans include starting a bike co-op run by youth from under-served communities, empowering them to learn mechanical skills, job skills and business literacy. His vision includes offering participants a bike they have helped build from donated recycled parts after completion of 40 hours of program education.

He is also looking at hosting a bicycle social and art show that would showcase a collection of vintage bicycles as well as feature bike-related photos, posters, sculpture, poetry and music. Attendees would be encouraged to ride their bikes to the event, of course!

Ventura has been meeting with local SCORE volunteers to put together a business plan for a Valparaiso bike taxi service where he envisions offering patrons a way to travel “at the speed of life” and perhaps even take in a romantic tour of his town.

Chuck welcomes the opportunity to connect with other like-minded cyclists throughout the state. He welcomes . Mention you saw him on Sustainable Indiana’s website.

For all of these reasons, Northwest Indiana Regional Coordinator Kathy Sipple has nominated Chuck to the Green Honor Roll for Sustainable Indiana 2016’s Take the Trail initiative.

Got a local hero you’d like to nominate? and we’d be happy to include it.

Posted On 1st July 2013
Don Rothbaum of Indianapolis celebrated his 70th birthday accompanied by many family members for a hike at the Indiana Dunes today. The adventurous group included

Posted On 27th September 2014
Before Sullivan County resident Joan Osburn bought her home in the mid-1970s, the current owner wanted to make sure she and her husband were going

Posted On 13th September 2014
Invasive bugs, bushes, fish and pigs are changing our eco-system here in the Wabash Valley. There are more than 50,000 foreign species in the Unites States,