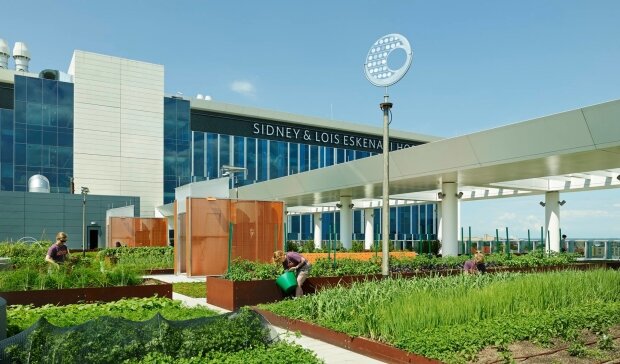 In 2009, Indianapolis voters approved a decision to replace the aging and inadequate Wishard Hospital with a new facility. Named for its benefactors, Sidney and Lois Eskenazi, construction began the following year. I took a tour of Eskenazi hospital with the intention of exploring the numerous eco-friendly amenities the hospital installed to become a greener business. Upon my entry I immediately noticed that this hospital is much more than the waterless urinals and paperless hand dryers I was told about. Eskenazi is more than just a hospital, it’s a cultural healing center.

I visited with the intentions of checking out the ecologically friendly attributes the hospital has to offer and quickly found that no corners were cut in the name of money. Eskenazi is the first hospital in the US to be LEED certified at the silver level. LEED is an acronym for “Leadership in Energy and Environmental Design” and involves meeting difficult requirements for energy efficiency, using environmentally friendly building materials, creative a positive impact within the community, as well as many other factors. In the reconstruction of the hospital, special attention was paid to using local and recycled material. Seventy percent of the construction waste was thus diverted from the waste stream. The new design allowed forty percent reduction in water usage. Water efficient appliances are utilized throughout the hospital; these amenities include low-flow faucets and showers, dual flush toilet handles and waterless urinals. Additionally, rain water is collected from the roof and is used in toilets, thus saving potable water at no extra cost.

The roof is painted with solar reflective white coating that reflects up to 90% of sunlight, as opposed to traditional black roofs which reflect only 20%. A roof’s SRI is a measure of a surface’s ability to reflect solar heat. This is a simple and cheap way to save money and energy. In the hot months of the year, Eskenazi will actually spend less energy by trying to compensate for hot weather via air conditioning. 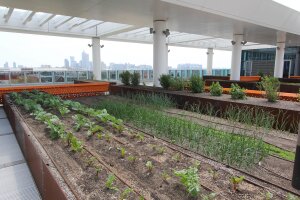 My favorite part of the visit was by far the trip onto the sky farm. For those of you who don’t know, a sky farm is a system of raised planter boxes placed on the roof of a building. During the warm seasons the hospital is able to grow a variety of fruit and vegetables to be used in meal preparation for patients. Eskenazi is not only saving money by doing this, but they can ensure that food they serve patients is an organic and healthy alternative to heavily processed meals. In 2013, the first year the sky farm was experimented with, the hospital was able to grow 3000 pounds of food for its patients. The sky farm at Eskenazi isn’t only a functional feature, any patient or visitor can go exploring there. Anyone can pace up and down the aisles of fruits, vegetables and grasses. The sky farm is also the best place in the hospital to view the city of Indianapolis. You can see out of the sky farm 270®. That view includes Lucas Oil Stadium, the “Big Blue” JW. Marriott, IUPUI Campus, and the remainder of the Indianapolis Skyline. I found myself not wanting to leave the sky farm, even in the dead of winter while no plants were growing.

Beyond the building, Eskenazi wanted to reduce the energy required to travel to the site. There are 250 bicycle storage units to encourage pollution free transportation for employees. Public transportation to the hospital is extremely easy to access around Eskenazi. In fact, there are three bus stops near the hospital. To promote carpooling and energy efficient cars, the hospital has premium parking spaces for such vehicles.

I applaud the Eskenazi staff on a number of things, but I think it’s necessary to recognize their use of art outside and inside the hospital. Just outside the front exterior entrance sits a beautiful glass building surrounded by an enormous metal sculpture. The metal structure is constructed so that vines are able to grow upward on the cables, encasing the glass building in a walls of green. There are also two water features in this same courtyard. The Eskenazi crew constructed a faux waterfall unlike any I’ve ever seen. Instead of draining the source of water during the winter season, the rock formation is designed to expand and contract. This means if temperatures drop below a freezing 30®, no damage is taken to the fountain when ice forms. More importantly, the waterfall naturally freezes into a display of ice that cascades down the front of the fall. On the opposite end of the courtyard a shallow wade pool rises up and sinks down naturally. Two poems are carved into the pavement on the rim of the pool. Depending on the level of the water and the time of day, you might see one poem exposed, and the other hidden underwater. Each poem has a message worth remembering.

Within the building are variety of styles of art, ranging from preserved nature murals to an enormous, contemporary ladder sculpture that hangs in the main hallway of this hospital. The designers of the updated building paid special attention to bringing the outdoors inside. A courtyard was constructed so that trees may be placed within the walls of the building, but are still able to change, grow, and mature as seasons go by. Strategically placed beside this courtyard, yet another a glass a room was specifically designed for people of any belief system to express their spirituality. Twice a day a different religious service is given, including but not limited to: Christianity, Islam, Judaism, and general meditation. When I asked my tour guide the reason they went through so much effort to incorporate art, design and nature into every corner and crevice of the hospital, he explained to me that art has a healing power medicine cannot duplicate. If a patient must spend time there, they can utilize the numerous indoor and outdoor facilities the hospital offers to rest, think, and find peace.

I was pleasantly surprised to find that the hospital administration had invited a popular Muslim folk band to perform in the lobby. The small group played numerous songs, both calm and exciting in nature. By far my favorite part of their performance was a man dressed in a long, white outfit. He danced elegantly in front of the crowd, showing off the white fabric that flowed nicely as he turned around and around. The patients who managed to see the performance were just as impressed and pleased as I was.

By far the biggest compliment to Eskenazi Hospital that I can reiterate is the care and effort they put into everything they do. This is an environment where care ranks over cost. As a college student I look for progress in everything I do, and I feel that I can safely speak on the behalf of my generation that now is a time for positive change. Eskenazi is a perfect example of that positive change we need to see.

Oaklyn Library Roof is a Prairie

Posted On 6th September 2013
Story and photo by: Aimee Blume EVANSVILLE — Hot evening sun spilled over a riot of wildflowers, insects droned and flocks of goldfinches nibbled on patches

Posted On 14th October 2015
"Hands On Indiana" engages the public to celebrate Indiana's Bicentennial in 2016 by pledging to sustain Indiana's Air, Water, Food, Energy, and Biodiversity. The pledge

Turn down your thermostat
Every degree lower in the winter or higher in the summer you put it is a 10 percent decrease on your energy bill.