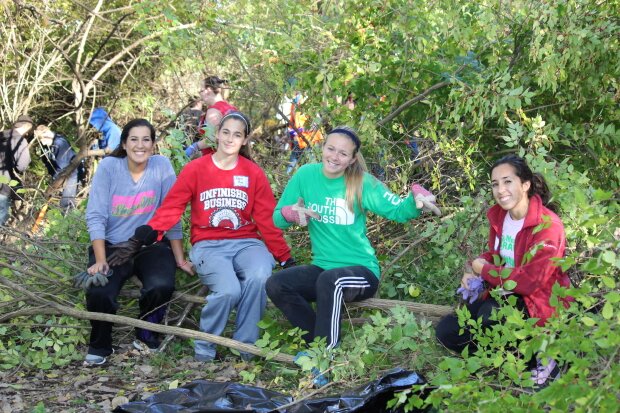 Terre Haute resident Jane Morse remembers ABH in her parent’s garden growing up. She says it was her father’s favorite bush. As an adult when it came time for her to find a home, she was drawn to one with a yard full of the plant. It took her 20 years to find out just how bad the bush was when it encroached her property, invading landscaped areas.

Asian Bush Honeysuckle is not our only concern says Indiana Native Plant and Wildflower Society Co-Founder Ruth Ann Ingraham. Invasive species are a major problem in Indiana causing significant economic and environmental damage. The future threat of several known (but, so far, absent) invasive species is even greater — with the potential to cause billions of dollars of damage to Indiana’s economy. Other examples are the kudzu bug impact on soybean yields, Asian longhorn beetle’s impact on timber and thousand cankers disease’s impact on walnut veneer.

“If you don’t control invasive species, you can end up with a mono-culture. A mono-culture will eliminate diversity. If you don’t have diversity you are not going to have the morel mushrooms in the spring. You will not have the wildlife to hunt because their food source from a diverse culture will no longer exist,” Ingraham said.

Ingraham is motivated to continue pushing the promotion of native plants for the fear of losing the richness and diversity in our forests. She encourages other communities to try some of the methods she has used to continue spreading the word. She writes about invasive and native plants on INPAWS.org. She helps to organize Nature Days in Brown County, an event that brings together people to learn more about the environment. One of the most personalized services she offers is a free landowner survey.

“When on a homeowner’s property, not only do we look for the bad things but also we look for the good. I help the homeowner identify plants that should be protected by not letting them be consumed by an invasion of invasive species. I conduct written reports to remind landowners of what we saw and how to prioritize the control of those species. I also list all of the great things that we find, so that they feel good about themselves and good about the land they own,” Ingraham said.

To learn more about invasive species in Terre Haute, attend a work day at Dobbs Park. TREES Inc., in partnership with the park’s Nature Center and Sycamore Trails, conduct these days in which residents are taught how to get control of and fight the invasive plants. Volunteers are taught how to use different tools and are able to test tools that work to the best of their ability.

“Each bush, depending on its size and how it is rooted and what kind of soil, there is a different tactic for removing [it]. It helps people a lot to come out to Dobbs Park during a ABH pull and get educated with us and then they will better be able to make decisions on how to take ABH out of their own property,” Morse said.

In late October, the Indiana Invasive Species Council conducted an Early Detection and Rapid Response Workshop at Purdue University. More than 60 invasive species experts and interested citizens attended. Great discussion led to the unanimous decision that Indiana needs to have a central database for folks to report where they spot an invasive. Once an invasive is reported, an expert would travel to the site to confirm the area had been invaded. By mapping out areas, it allows citizens and officials to work together to prevent the invasive from spreading further.

It all starts with education, and a great place to start is at www.entm.purdue.edu/IISC.

Perception of Indiana: Positive and Negative

Posted On 23rd October 2014
Sustainable Indiana 2016 seeks to encourage Hoosiers by discovering, cataloging, and celebrating Hoosier based climate solutions. Part of this mission is to counteract the perception

Posted On 31st May 2013
According to the U.S. Centers for Disease Control and Prevention, lead poisoning is the No. 1 preventable environmental cause of illness in children. Children between

Walk or ride your bike when you can
If you have to go somewhere close consider riding your bike or walking there instead of your car. It is better on the environment and healthier.