Family grows into life on the farm 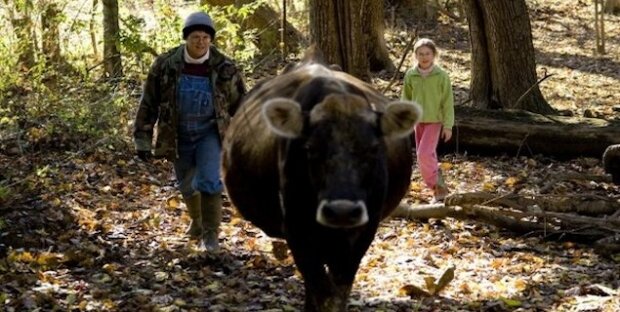 ROCKPORT, Ind. — “I have a rooster named Bob, a hen named Lacy and a hen named Francis,” 11-year-old Maggie Shourds said between chores on her family’s farm. “One of our toms is named Tom and the other one’s named Frank. We name the ones that are our breeders. Because around here, animals that are named do not get eaten.”

“Our goal is to be sustainable,” Gail Shourds said of their Community Supported Agriculture operation. “We’re trying to grow more of our own food and cover the bases. Not just vegetables. Not just pork. We have dairy now and we have eggs and we have a variety of meat that we can eat. And we’re trying to do it in such a way that we can provide it to other people, too.”

“I’m not sure when she’s supposed to calve,” Glenn Shourds said of Sage, a hybrid guernsey and brown Swiss milk cow. “When she’s milking, we only milk her once a day and we still get more dairy than we can use even making our own cheese. You have to live on yogurt and mozzarella cheese and whatever. We get about a gallon a day,” Gail Shourds added.

“One of our beliefs is not only do we try to do sustainability, but we want others to do the same thing,” Glenn Shourds continued. “We want to be able to provide an avenue for others to get some good, healthy food whether they actually can do it on their own property or not.”

“In about another year we’ll get it cleared out to where it won’t feel like we’re living in the deep forest,” Glenn said of the farm which was rife with trees showing damage from the ice storm of a few years back. “We feel like finally we’re starting to make some progress.”

As it stands now, the organic farm is teeming with chickens, ducks, turkeys, geese, goats, cows and hogs. The hogs, a heritage breed known as the Mulefoot, is all black with a single toe, unlike its cloven-footed cousins. They differ from the longer, leaner hogs bred by most hog producers these days because they have smaller litters and their meat is darker with more fat. But, according to the Shourds, the hogs make great hams and tasty pork chops.

“People like to come out to the farm. They think it’s fun to come out and see all the animals,” Gail Shourds said. “The people who want what we have don’t mind driving out here to get it.”

Pictured- Gail Shourds, left, and her daughter, Maggie, 11, follow Sage, a hybrid Guernsey and brown Swiss milk cow, as she heads up nearer the outbuildings on the family farm on Thursday evening. “We have two cows,” Maggie said. “(Sage) is a full-size dairy cow and (Rosemary) is a calf for me to take to 4-H.”

Posted On 3rd August 2013
Caleb Fiechter is young farmer in a family that has been farming land in Wells County for four generations.  Yet, Caleb is not your typical