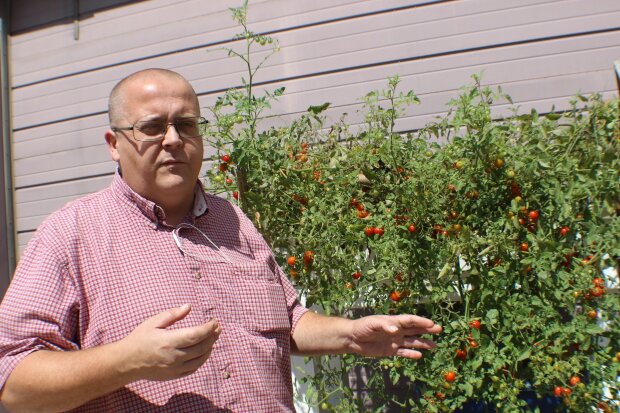 A ride at Disney World has put one Terre Haute father on a mission to secure our food supply here in the Wabash Valley, by using aquaponics.

The Living with the Land ride at Disney World in Orlando, Fla., educates guests about the future of food production. The slow-moving ride caters to pre- and grade-schoolers, but Mat Pollom, 38, exited the ride wanting to know more. At the conclusion of his family’s Disney stay in 2007, he went back for more, this time backstage.

Still, Mat had so much curiosity bursting through his brain he convinced his family to take a detour on their family vacation to Brooksville, Fla. Brooksville is home to an aquaponics company called Greenacres. “My family was amazed that they recycled everything from top to bottom,” Pollom said.

Before understanding aquaponics, you must first learn the basics by mastering hydroponics. Hydroponics is a method of growing plants using mineral nutrient solutions, in water, without soil. You get a hydroponic product every time they purchase a tomato at the grocery store. “It is an extremely wasteful process because the hydroponic fertilizers, which are mostly petra chemical based, have to be removed or reset every 12 to 14 days,” Pollom said. This method does affect the quality of product, but we have gotten used to it over the years with the luxury of having tomatoes in December.

Waste not, want not

Mat is not one to waste. He was raised in part by his grandfather, a World War II veteran who lived through the Great Depression. His grandfather knew the value of a banana peel, in that you should not pay someone to take away garbage that could be composted and help the soil.

Mat has taken those same principals and applied them by growing food using aquaponics. It is a process where you raise fish in containers and their waste is fed through a hydroponic system. The by-products are broken down by nitrogen-fixing bacteria into nitrates and the nitrites are utilized by the plants as nutrients. The water is then recirculated back to the aquaculture system.

Mat jokes that aquaponics is the lazy man’s garden because once you master the science behind it, there is not much to it. The biologic process feeds itself. You just have to replenish water from time to time. “With aquaponics, as long as you take care of your fish, everything else just takes care of itself,” Pollom said.

The best part is wind-blown seed will not germinate in an aquaponic garden. This cuts down on weeding, but aquaponics may still throw some a curve ball. Pollom says what a traditional grower would see as a nitrogen deficiency is actually a deficiency of iron or magnesium in aquaponics. “Nitrogen is the one piece of the fertilizer puzzle you can never run out of in aquaponics,” Pollom said.

After Mat returned home from his vacation in Florida, he wondered if the same type of growing could take place in cold northern climates. The answer from an emphatic, yes.

In the brutal month of February in 2008 Mat headed up to Milwaukee, Wisconsin., to visit Growing Power, an aquaponics farm. After taking a tour, he was blown away and stocked with more passion. He was once again amazed how efficient an aquaponics facility can be.

Mat says, 70 percent of their heat was generated from a compost pile. “During the tour we were walking toward some tomatoes. I couldn’t help myself. I reached over, popped off a cherry tomato and was just amazed at how good it tasted,” Pollom said. Mat remembers asking the tour guide with food tasting that good, why there wasn’t one in every city.

Aquaponics is gaining a strong hold in Chicago, but that does not worry Mat from opening a facility in Terre Haute as he says the competition is not with our neighbors but countries like China. According to the National Oceanic and Atmospheric Administration, today 91 percent of seafood consumed in the United States is imported.

The United States mainly imports seafood from China, Thailand, Canada, Indonesia, Vietnam and Ecuador. Our top imports by volume include shrimp, freshwater fish, tuna, salmon, ground fish, crab and squid. Buying food from other countries is worrisome since they do not have the same stringent oversight U.S. producers do. There are reports of fish farmed in Asia and imported to the U.S. that have been raised on diets of chicken and pig feces.

After leaving Wisconsin, Mat’s passion was at an all-time high.

When he returned home he built a small system. It produced enough to feed his family once a week. Still Mat yearned for more.

In 2012, he founded Greener Scenes Aquaponics. As a long-time customer of Inland Aquatics in Terre Haute, Mat talked to the owner about setting up a bigger model at their store. He is one year into his proof-of-concept operations.  This past winter, he operated on a 400-watt LED light. With the warmer weather this summer, he brought the plants and fish outside.

Mat’s model has turned into quite the conversation piece for customers. “I have had folks say, ‘will this plant work in aquaponics. I said, I don’t know, give me one and I will try it. That is why we have such a hodgepodge of items. I have everything from Basil to Brandywine tomatoes growing,” Pollom said.

His entire operation is running on 1,000 watts of power, what he equates to a home entertainment system running. Customers may not even notice the operation, as it blends in with the aesthetics at Inland Aquatics.

With all the passion and research put into a thick business plan, he says he does not have the financial strength to make his dreams become a reality. He needs $350,000.

His plan would create three jobs initially and 20 jobs after the first 8 to 10 months. After about a year, he would be able to bring 40,000 pounds of Aquaculture to market with a value around $150,000. The produce sales would be three times the value in one year.

“It is not a question if you can sell the food but what are you going to sell it for,” Pollom said. He believes his business would become sustainable in one year and debt free in less than five years.

Ultimately, Greener Scenes has the ability to create a stronger food security plan for the Wabash Valley. Additionally, it would create a market for organic, better tasting, locally grown food year round available in local grocery stores. Mat would also open his doors to the public so they can learn more about self sufficiency; much like Disney did for him, with hopes of inspiring more like-minded entrepreneurial spirits.

Posted On 12th October 2013
Getting your first bicycle is one of life’s milestones for most people. Most of us can remember the day it happened. But for some families,

Shorten your shower
Every minute you cut from your shower is roughly 5 gallons of water. The less time your shower takes, the lower your impact on the environment.