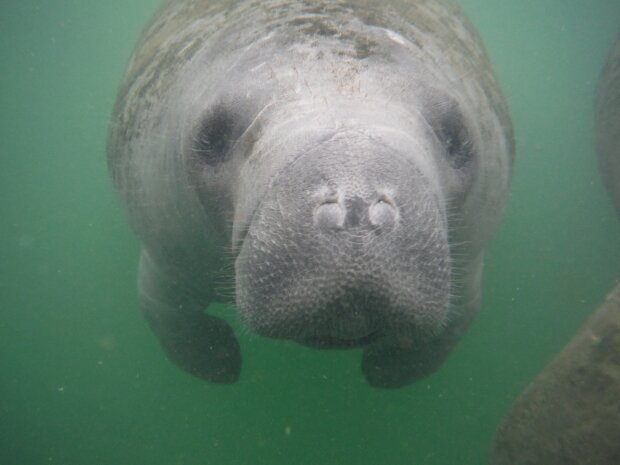 The year 2013 was the deadliest on record for manatees with about 829 reported deaths. This was a major jump from the 392 in 2012 and the record of 766 in 2010. While the cold weather played a role, one major attributing factor has been toxic red tide events caused by algal blooms. While algal blooms are a natural and seasonal occurrence, they are intensified by pollution, especially nutrient loading, such as from agricultural and human wastes.

What we do here in the Corn Belt is distressing the treasured sea cow since the vast majority of our water goes down the Wabash River, into the Mississippi River and empties out into the Gulf of Mexico. This news brings heartache to West Terre Haute resident Stephanie Miller.

It was the late 1980s and Miller was mesmerized by a program on TV about Apollo Beach, Fla., where they had built a manatee viewing area outside Tampa Electric. She told her parents the next time they went to Florida, she wanted to go there. Like most loving parents, they caved in to their child’s desires.

“I just stood there for hours. After going down and seeing them for my first time, I guess you can say I became obsessed with them. I wanted to learn more about them and how I could get more involved in saving them,” Miller said. 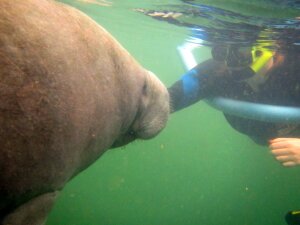 From that point on, it’s been her dream to swim with the manatees. Throughout grade school and college she produced research projects and presentations with manatees as the central theme, anything to continue sharing her love for the sea cow. She admits to watching the manatee web cam while at work, saying, “It is just one of those things that is so relaxing, yet sad on how something so big can be endangered.”

Then this year, her dream came true. “I just wanted to ball. I really did. It was just that amazing feeling. I am in their home, their habitat. I wanted to cry, I wanted to squeal. It was so exciting,” Miller said.

Crystal River, Fla., is cognizant of its environment. No-wake zones limit the amount of manatee casualties caused by boaters. Zones are roped off where folks can and can’t swim with the animals. The strict guidelines allow human interaction with the manatees, if the animal so chooses.

“Just by looking on the outside, you may not understand the issue of their environment. But when you get to interact and immerse yourself in their environment it gives you a whole different perspective and a different kind of passion,” Miller said.

Now that she has swum with them, she is even more driven to protect their habitat. She participates in the Adopt-a-Manatee program for $25 a year to help with research and rehab. Miller is not the only one in the Midwest fond of the sea cow. In Michigan, hundreds turn out for an annual manatee run, raising awareness and money to support protecting the animal.

Miller says it is the simple things we can do here in the Wabash Valley that can have a positive impact on a manatee’s home. Some examples would be recycling, using fewer pesticides and using less water when we brush our teeth.

“Manatees swim in both sea water and fresh water. Since water is always in a cycle, we have to think that we may not be polluting their area specifically, but we are still affecting the water cycle,” Miller said.

As folks living in the Corn Belt, we need to be cognizant of the hypoxia situation in the Gulf. Not only do we not want the chemicals traveling down the waterways, we don’t want them leaving the farm field, says USDA-Natural Resource Conservation Service Parke County District Conservationist Donald Donovan. There are four things specifically farmers can do:

1) No-till cropping system — You get weed control from cover crops. When you use no-till, the ants and other insects are great consumers of weed seeds lying on top of the soil. If you till the ground, the ants won’t come. Ants eat thousands of weed seeds. There are 1,700 species of beneficial insects for every bad species of insect.

2) Use cover crops — Cover crops keep a living root in the soil, which enhances microbial activity.

3) Utilize a nutrient management system — Analyze where and when fertilizer is applied to reduce the chemical output.

4) Install buffers — Install an area of permanent vegetation so chemicals are not directly entering the water source.

A world without manatees

One thing is for sure: We shouldn’t take any living creature for granted. Here in the Wabash Valley we have an amazing population of bald eagles. “That was something we didn’t have in the past, but because people became aware of it, because people became passionate about it in this area, we’ve seen them come in,” Miller said.

It is quite possible that because of our actions today, future generations may not have the luxury of swimming with manatees.

“We live in an environment. We don’t live in a glass bottle,” Donovan said. “It is a system which we are all a part of. We need to realize ‘what I do today may impact a manatee three months from now.’ We can’t just think we have no off-site impact. Just because it is out-of-sight, out-of-mind, off-my-farm, [that] doesn’t mean it should not be a concern to me.”

Miller said she doesn’t want her kids, one day, only reading about manatees in textbooks. She also doesn’t want them to see the photos from her past and wonder “what is that thing; why can’t I see it?” She doesn’t want to have to explain to them that as a society we were careless and we killed them.

Posted On 10th October 2013
Terre Haute resident Karla Hansen-Speer studies the remains of plants cultivated or used by man in ancient times that have survived in archaeological contexts. She’s

Plant a tree
It is good for the air, can keep you cool, and can increase your property value.