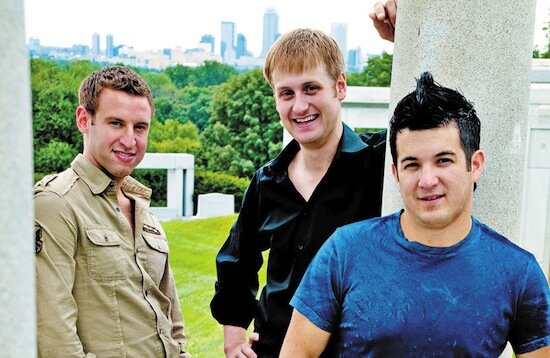 “It’s cool to see the excitement on a 15-year-old’s face,” says Zach De Pue, concertmaster of the Indianapolis Symphony Orchestra (ISO) and member of Time for Three. De Pue joins Nick Kendall and Ranaan Meyer in the cutting-edge trio.

For the past two years, Time for Three has been the centerpiece of a new residency program created by the ISO. This residency has enabled the orchestra to reach out to the community in new and creative ways. It has also lent a high-profile identity to the orchestra’s continuing efforts to attract the next generation of audience members.

Drawing younger adults to traditional arts venues has been a challenge for most cultural institutions. Through its residency program, the ISO has been able to draw many of these folks into its Happy Hour concerts by featuring Time for Three’s charismatic approach to music-making.

“The idea of developing a residency with Time for Three was a very natural process for several reasons,” according to Martin Sher, the ISO’s Vice President of Artistic Planning. “In Zach De Pue, the ISO hired not only a brilliantly gifted violinist and natural leader for the orchestra, but also tapped into a completely new breed of musician, one who is able to express himself in a multitude of musical languages through Time for Three. Time for Three has an amazing ability to connect with all kinds of audiences…It wasn’t difficult to imagine them not only performing here on a regular basis in a variety of settings, but also serving as ambassadors for the ISO in the community.”

De Pue says the residency program started as an experiment. “There really was not a prior example to be followed with this. It was something that seemed to fit the ideals of Time for Three. We’re trying to engage a younger audience with the sound of classical musical instruments.”

De Pue and Kendall both play violins; Meyer plays the double bass. While Time for Three is adept at playing a classical repertoire, they are also known for their reinventions folk and pop tunes, as well as their own original compositions and those of contemporary composers. They can also jam.

De Pue says the challenge lies in finding the right balance for this musical menu. “Our college buddies, who are 30 now, would love to hear Katy Perry’s ‘Firework,’” says De Pue. “Many of my colleagues, if they are familiar with that, are going to say, ‘You’ve got to be kidding!’ So we have to figure out how to build a bridge in a cool way.”

One way that Time for Three’s residency is building bridges is through working with high school students. The group has established relationships with Broad Ripple and Perry Meridian high schools. It also collaborates with the Metropolitan Youth Orchestra.

Story provided by NUVO.  Time for Three is a 2011 Cultural Vision Award winner.

Posted On 6th January 2015
Over the past few years IUPUI has added 30+ water filters to campus, switched over to single stream recycling, planted two campus gardens, and added

Posted On 21st November 2014
By rewarding citizens in the form of Community Currency for engaging in sustainable activites, Make Change Indy is creating a sustainable ripple effect of positive

Posted On 6th June 2014
An extension to the hiking-biking trail system was opened in Anderson on May 31, 2014.  The trail now extends from the Rangeline Road on the