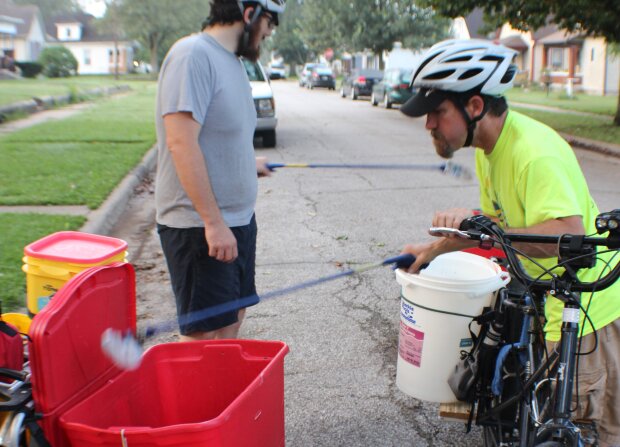 Before the dew ever sets into the grass on Sunday morning, Terre Haute resident Rance Fuqua has already stopped for a donut and coffee on his bike. The red light on his back tire flashes, and he peddles in the darkness navigating to Walter Baldauf’s garage. Once there, the two tinker around for a bit. As the sun slowly starts to rise, they strap kitty cat litter buckets and large plastic totes to their bikes. With one hand on their handlebars, and the other holding a long grabber, they are off, meandering around the streets of Terre Haute to pick up litter.

For Rance and Walter, picking up litter is just something they do. They both commute to and from work by bicycle and pick up litter as they pedal. The duo met at the Swiss Connection Cattle Drive where one spotted the other’s long-tail cargo bike. Their wives exchanged phone numbers and were reunited at the Keep Terre Haute Beautiful Spring cleanup. They are both very active and have little interest in sleeping in on the weekend. On Sundays while their wives sleep in, they go out and do what guys do best in each other’s company, goof around.

There is no rhyme or reason to which areas of town they go to or which street they turn down. I found just when you think they would go down one street, it was only to do a figure-eight and go in a different direction. If you hear two guys laughing outside early in the morning, you can make a solid bet it is Rance and Walter having fun. They are the secret caring community members few notice. “I figure everyone wants to make a difference and this is an easy way to do it,” Walter said.

They pick up everything from cigarette packages to glass bottles, which they say are most prevalent around bars. As a father and medical student, Walter is concerned about the potential hazards of abandoned glass bottles. “I probably picked up two dozen glass bottles that won’t end up broken and kids won’t step on them. There are a ton of kids in this neighborhood and I would hate for one of them to get a cut.”

I really admire their passion for a cleaner community. On one trip, they swung into Collett Park. There they even removed trash/recyclables from the bins so the lids would close, in order to prevent the overflowing trash from blowing onto nearby properties. During the most random times of their trip, a couple locals expressed their appreciation. Walter said, “a guy in Collett Park came over and shook our hand and thanked us for picking up trash.” Rance added, “A guy by the Whiskey Barrel told me thanks and God bless for picking up trash around there.”

Love where you live

Riding a bike, you get a whole different perspective on litter than when driving a car, especially when you’re looking for it. Even though the average passerby may not notice the duo’s work, and those who litter will continue to litter, at least someone is doing something. “You can’t think of it that much. Our goal is to go out, have fun and pick up trash. There is no way saying you’re going to get it all. It would be like getting upset when your grass grows after you cut it. It is going to grow,” Rance said. They are making a difference. In one morning, they filled a 50-gallon trash bag that will not flow into the lakes, streams and landfills. They sort it and take the material to local recycling facilities.

Rance hopes the pride he demonstrates becomes contagious to onlookers. He notices even in his own neighborhood when one homeowner trims their sidewalk, someone else on the block will do it, too. The idea is, if one person works harder in their yard, then hopefully the next person will do a little extra than they normally would. Since Rance met Walter, he has been inspired to add a bucket to his commuter bike so he can pick up trash during travels. “I think the best thing we can do is pick the trash up ourselves. Set the example. People will see you doing it and hopefully follow,” Walter said.

Both as parents, Walter and Rance agree that educating kids is the key to fixing the problem. For example, Walter was raised to pick up trash and recycle, but it wasn’t until he became an adult and stumbled across the benefits of composting that he started incorporating it into his life. The more programs we have in the school curriculum and intertwined in community programs, the better chance we have of having a cleaner community. Anytime you get a chance to educate children, take it, for they have the opportunity to take that knowledge home and educate the parent. “If the kid nags the parent, don’t throw that in there, let’s recycle, a lot of times the parent will get a little recycling bin to appease the kid. But if the kid keeps up on it and calls the parents out for putting plastic in the trash can, then sometimes it becomes habit and you don’t even realize it. It is like washing your hands after you go to the bathroom. It is not an extra step, it is part of the process,” Rance said.

Recipe For A Healthy Community

The Garden of Eatin

Garden, Learn, Give, Enjoy (at the Garden of Eat’in)

Posted On 16th September 2014
Chris Dobbins-Guill, the founder of the Garden of Eat'in says, “My primary purpose was to provide fresh fruits and vegetables for our local Kenneth Butler