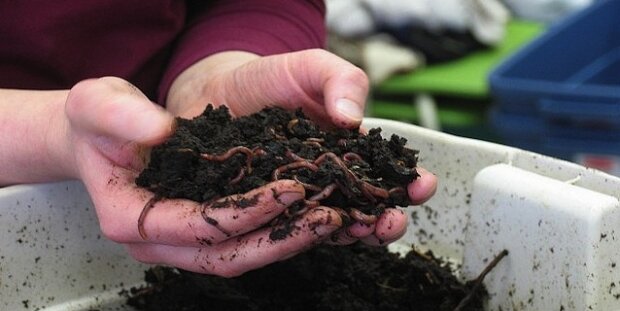 “We are very much a throwaway society,” avid composter Greg Fields said.

In the Fields’ home they compost all of their leftover food scraps with the exclusion of anything dairy or food covered in oil. Recycling food waste and turning it into compost has many environmental benefits such as improving soil health and structure; increasing drought resistance; and reducing the need for supplemental water, fertilizers and pesticides.

“Instead of throwing your scraps outside or throwing them in the garbage to let your trash man pick up, just start putting them in a coffee container,” Fields said.

When his coffee container is filled, Fields walks it down to a 35-gallon covered black container he has sitting on his deck. When he lifts up the cover to show off the rich dark soil, bugs fly and come crawling out. While the bugs are at first surprising, you then notice the compost has a nice earthy smell to it. Greg has emptied his 35-gallon container three times this year, amounting to 105 pounds of food waste he has diverted from the local landfill.

Good for the soil
Compost is organic material that can be used as a soil amendment or as a medium to grow plants. One must look at the pore space in their soil structure to see how well it holds water. Clay soil is known to hold water too long, whereas sandy soil is known to drain water quickly. A balance of the two is optimal.

“Compost helps those with sandy soil, because it helps bind up the soil to retain more water,” Fields said.

I like to compare compost to fiber humans take to regulate their digestive system. With the right balance, everything works properly. One can achieve the best of both worlds by adding compost to their garden or container plants. Fields’ property sits on clay soil; for him to allow the soil to drain better, he uses a combination of one third peat moss, one third vermiculite and one third compost in his deep, raised beds which line the outside of his house.

“Our raised beds dry out quicker. They are the first areas in our yard that we can work after a rain storm. Everybody else is trying to work in their garden on straight clay soil and can’t touch a plant without being covered in mud. We can get into ours and be ahead of everybody else by two to three weeks,” Fields said.

Living with worms
Fields has 2,000 pets living in his house. They don’t need a litter box or need to be taken outside. Instead they eat much of his food scraps and any notebook paper he discards as scrap. Fields vermicomposts, a method where one takes red worms (not night crawlers) or field worms found in gardens and places them in bins with organic matter. The worms then break down the organic matter into a high-value compost called castings. Worm bins are easy to construct. Many folks use a large plastic tote and poke holes in it. Fields has kicked his operation up a notch and constructed a three-level house for them to live in, which he sells on jjnursery.net.

“You put the worms on the bottom and the food above them. As they crawl up into the next layer to eat the food their castings fall to the bottom layer, making it easy to scoop out,” Fields said.

Worms will eat almost anything you would put in a typical compost pile although they are not too crazy about citrus. One pound of mature worms (approximately 800 to 1,000 worms) can eat up to half a pound of organic material per day. It typically takes three to four months for the worms to produce harvestable castings, which can be used as potting soil. Vermicomposting also produces compost or “worm” tea, a high-quality liquid fertilizer for house plants or gardens. An alternative to store bought, harsh chemicals.

Vermicomposting can be ideal for apartment dwellers or small offices that want to derive some of the benefits of composting and reduce solid waste. In addition, it is frequently used in schools to teach children about conservation and recycling.

Posted On 21st July 2014
CONGRATULATIONS INDIANA: Renewable energy is alive and well. As of Fall 2013, Indiana ranked as the thirteenth highest state in terms of installed wind power

Posted On 10th July 2014
For more than 34 years, Brad Fix has been in charge of the Indiana Wastewater Treatment Plant and collection system in Shelbyville. He says the