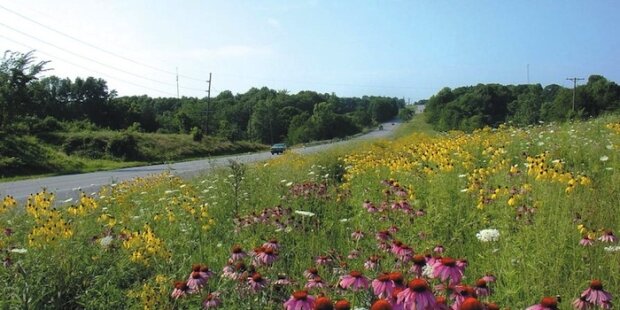 The State of Indiana spends $10 million dollars a year cutting grass by mowing 99,000 acres, the equivalent of more than 154 square miles. Meanwhile, in Kansas officials have revamped their mowing policy to promote the re-growth of the state’s natural prairie habitat along many state highways. In turn, they have cut their mowing costs by $1.5 million a year.

While Kansas may be known as the Sunflower state, it also receives national attention for wildflowers and prairie grasses. Every year, thousands of tourists flock by bus to go on wildflower tours throughout the state. Kansas’ scenic byways haven’t always been as beautiful. It took leaders in the state who saw the degradation mankind had done over the years to the natural habitat, to take action by moving in the direction of planting native grasses along the roadways in the mid-’90s. In 2008, officials dove in full force and planted 100 percent of native grasses along the roadsides with several different types of wildflowers mixed in.

“There are very few prairie grasslands in the nation now. We are trying to mimic that look again on our roadsides. It has been a win-win situation, where we can save money on fuel and labor costs while still having a really unique view of wildflowers blooming year round,” Kansas Department of Transportation Environmental Scientist Scott Shields said.

The biggest reason for the switch was to save money on mowing. The old-fashioned way was to take passes up and down each strip of grass with the mower every time the grass grew taller than six inches. The revised policy has workers conducting a complete mow-out once every three to four years, not months or weeks. For safety reasons, they continue to make one pass along the shoulder of the road and in areas where tall grass might obstruct a drivers’ view. Areas outside the shoulder edge are not mowed between April 15 and Oct. 1. This helps protect ground nesting wildlife in the spring and aids in the sustainability of the native grasses and wildflowers by allowing them to go to seed.

“Native Grasses don’t need to be mowed like cool season grasses, plus we don’t need to spend the money to fertilize them,” Shields said.

• Beautifies roadsides by providing color and texture at all seasons

Indiana started experimenting with wildflowers and native vegetation in the late 1980s. Indiana Department of Transportation Roadside Services Coordinator Bill Fielding says the Hoosier state only has 800 acres in wildflowers out of the 99,000 workers mow in part due to their fight with invasive species.

“When I first got involved in this in the late ’80s early ’90s, I was told that if you plant native vegetation, warm season grasses, wildflowers, you were maintenance free. That was the selling point. Nothing is maintenance free. What we found was if you leave it alone and you don’t do anything, we get invasive species. It seems like in the past 10 years we have had so much of an increase in invasive species,” Fielding said.

In order to get the wildflowers established, one has to first take control of any invasive species and noxious weeds, which can be an uphill battle. Once step one is accomplished, then the wildflower seeds can be sowed. During the first year, annual seeds must be mixed in, since wildflowers can take anywhere from two to five years to become established and bloom.

“Purdue has a saying about native vegetation. The first year they sleep, the second year they creep and the third year they leap,” Fielding said.

The time between sleep and leap can be difficult for those responsible for maintaining the area and drivers who may view the area as unsightly. A prime example is back in 2002 when INDOT planted wildflowers along U.S. 40.

“We didn’t put enough grass in it. It didn’t have a lot of fescue and it was mowed too low,” Fielding said.

INDOT is currently working to educate its workforce on proper plant identification, proper mowing heights and better vegetation management. Fielding said once INDOT jumps over that hurdle, it plans to focus more on increasing the wildflower habitat areas.

Additionally, INDOT offers a program where groups can adopt a spot. The program is similar to the adopt a highway program. A designated spot allows a group to grow and maintain wildflowers. Keep Evansville Beautiful and Keep Indianapolis Beautiful have both been successful in adopting spots within their cities.

Those interested in adopting a spot to plant wildflowers should call your district INDOT office.

-Jane Santucci is an environmental freelance writer for the Tribune-Star. Santucci is a proud volunteer with TREES Inc. and Sustainable Indiana 2016

Posted On 13th May 2015
Open Letter to Last Night’s Passersby I wanted to thank you, personally, for the shitty diaper you left by the side of the road last

Posted On 2nd December 2014
Ditzler Orchard in Rosedale (8902 S 625 W) sits on the top of a hill off a half-paved, half-white-rock road. The orchard reminds me of