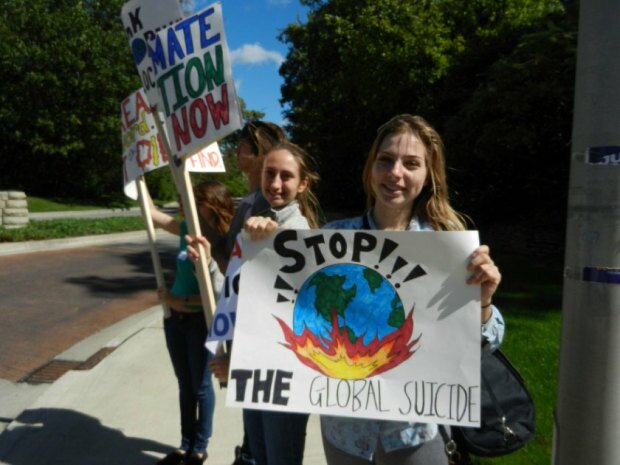 The Muncie Climate Rally (organized by Carolyn Vann with substantial aid from John Vann and numerous other individuals who made signs, distributed fliers, or emailed friends to spread the word) was held from 12-2 PM at the Riverside United Methodist Church on Wheeling Avenue (pastor John A. Young kindly permitted us to use this facility). We waved signs and shouted slogans from both sides of Wheeling and the four corners of the intersection with Neely. The stoplight conveniently stopped the traffic in pulses so that we had a series of captive audiences. Participants were asked to bring noise makers and at 1 PM when the NYC marchers were making a great noise, we blew horns (one participant played a saxophone), shook noise makers, banged pans, and rang hand bells while the church bells pealed, all in a resounding cacophony.

The event was covered by the Ball State Daily News and by the Muncie Star Press. The Daily News quoted John Vann (Director of the BSU sustainability minor) as saying: “Of all the sustainability issues, I am convinced climate change is the most important of all. It isn’t going to matter if we get things right in terms of recycling or toxins in our water, if we allow the climate to go off the rails. I really think civilization is at a critical juncture, and if we don’t do something about it, in a 100 years there may not be a civilization. There may be pockets of humanity here or there, but we are going to have a huge crash.”

Among those at the rally holding up signs to passing motorists was Rep. Sue Errington. The Daily News quoted her as saying: “Indiana is one of the polluters in the country [and] I think people are realizing climate change is happening now. I think we are getting more in your face about it than we were. The Daily News also quoted Kiara Goodwine (a 17-year-old senior at the Indiana Academy) who said climate is the biggest threat to civilization. “I think it’s really important to speak out about it, especially our generation because we are the ones who are going to have to make a difference in this,” she said.

The Star Press also quoted several participants. David LeBlanc (a Biology professor at BSU) carried a poster reading “There is No Planet B.” He said the earth’s climate has parallels to the Titanic. “It’s call inertia. The Titanic saw the iceberg coming way in advance of actually hitting it, but they were going too fast and couldn’t turn their ship quickly enough to avoid it. We are changing our climate too fast. The climate change we are experiencing now is from carbon dioxide that went into the atmosphere decades ago.” Another protestor, Robert Koester (Director of the Center for Energy Research, Education and Service at BSU) said, “A lot of the folks who push back on global warming argue the science is not solid, but that’s not accurate. They also argue it works against the economy, but that’s not accurate. This is an opportunity to create a green economy, all kinds of new jobs if we just shift our skill sets to green technology.”

History has shown us that when legislatures fail to act on important issues, people protesting in the streets can get their attention and instigate needed changes. At this critical point in time we must demand quick legislative action on climate and continue to keep pressure on our law makers. In the future we can look back at the Muncie Climate Rally and be proud that we were part of 2646 registered solidarity events in 162 countries on this day when we had the largest climate march in history, all of which may help to ignite climate policy changes.

The following pictures were taken by Sheryl Swingley (BSU professor of Journalism).

This Library is on a Roll!

Posted On 30th September 2015
It started with a card table full of books, like these things often do. Just something to sell to raise some money for the Orleans

SOCIAL SUSTAINABILITY – Beyond I CAN

Posted On 10th August 2014
Social sustainability is difficult to define and is very broad - encompassing the health of people and their communities.  It includes such topics as social