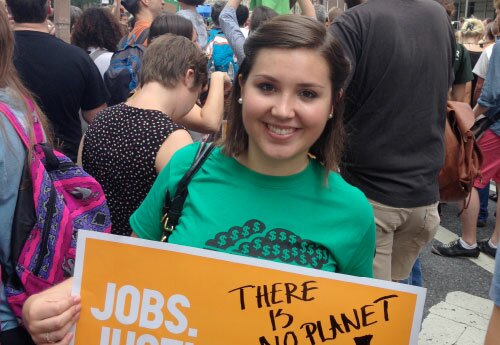 n September 21st, I had the amazing opportunity to travel 14 hours by bus to New York City with Hoosiers from all over the state to attend the People’s Climate March. As the largest climate march in history, with numbers that ranged over 400,000 in size, I have never felt so cautiously optimistic about the direction this movement is headed. Standing among so many others who feel as passionately for the environment as I do, wedged between Central Park and skyscrapers, I felt a sense of unity that I have never felt before. While taking in breathtaking views of the city during this march I also took in powerful messages from those hundreds of thousands who surrounded me and shared this life-changing experience with me.

Turning my head in all directions and seeing passionate people with strong messages can be described by nothing other than pure inspirational bliss. One of the first signs that I saw simply stated, “I’m marching for MY FUTURE.” A young boy walking with his family held up this sign with pride as he marched. I, and many others around me, couldn’t help but snap a quick picture. Seeing this boy was just the reminder that I needed – we are marching for others like him, his children, and his children’s children. It’s important to be reminded that this issue spans far beyond our years. I left this march thankful for the genuine hope that it gave me. I left feeling that we, as a people, do not need to fear for our future generations if we act now.

As I was walking through this march looking at people young and old, dressed extravagantly, from around the world with such inspiration and heart wrenching things to say I had the thought that up until this point in my life I have never been surrounded by such a diverse group of people united for one primary purpose. That is the amazing thing about this movement – the drastic impacts are not selective in their negative effects, which creates a diverse community of support to save this planet we call home. But this is also the same reason that I remain cautiously optimistic. The people, the base, we can only do so much. In November, we, as a united people, have the opportunity to vote on those people who will be making the crucial decisions in the important upcoming years about the direction they want to see this planet go in. In the meantime, support for climate action will just continue to grow and The People’s Climate March made me hopeful we can stop climate change while we have the chance.

Marisa Heiling is a political science and biology double major at Butler University in Indianapolis, Indiana and plans to attend law school after graduation to study environmental law. Contact her at: to talk more about what you are doing to live a more sustainable life.

The Future of Food

Posted On 1st April 2015
We are doing something new over here on "The Book" tab, which used to be the "Blog" tab... We are writing a book! Yes, really!

Posted On 13th September 2014
Invasive bugs, bushes, fish and pigs are changing our eco-system here in the Wabash Valley. There are more than 50,000 foreign species in the Unites States,

Hang outside to dry
Get a clothes line or rack to dry your cloths. Your clothes will last longer and you will save money.