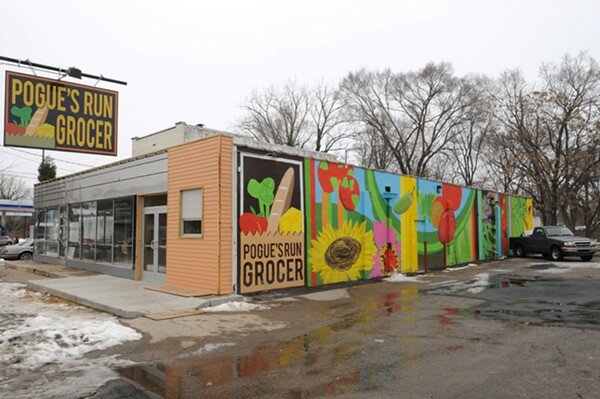 Getting a fresh head of broccoli in May should be easy enough. But if you live in an urban area and don’t have a car, it can be next to impossible. In fact, getting much of any fresh, healthy food is especially challenging in many urban areas.  About seven years ago, a group of people got together on Indianapolis’ east side and sought to remedy that situation for one area of the city. The result was Pogue’s Run Grocer, which opened on Dec. 28, 2010 as Indy’s first cooperative grocery. 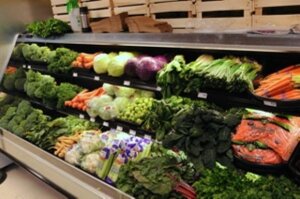 Pogue’s Run Grocer seeks to provide healthy, affordable food to their community on East 10th St. A walk down the aisles shows a full range of healthy food without the junk food and highly processed, nutritionally empty products that take up so much space in conventional stores.

The store is run on a cooperative model similar to a credit union in the banking world. Members pay a fee and gain a voice in the operation and a vote in the decision making. With over 500 members, Pogue’s Run has gained wide spread support and is very close to self-sufficiency. However, anyone can shop there.

“We refuse to poison people.” says General Manager Nathan Roberts. They seek to provide healthy, nutritious food as a reasonable cost. When possible, they use local suppliers. About 95% of their meat is from local farms and in the summer months, most of the produce is grown locally.

An important part of their mission is educational. Customer Service Manager Alan Walker says that since coming to work at the store, he has lost weight and his health has improved as he has become more aware of good nutrition and diet. “We try to introduce a healthy option and encourage people to look differently at food.” Additionally, Pogue’s Run offers sessions on backyard beekeeping, growing herbs in a window box and urban chicken raising.

Pogue’s Run is more than just a grocery store and has a significant impact on the community. Roberts says, “We bring people together. People start connecting. Just being open and facilitating those conversations is probably our greatest asset apart from the food.”

There is a deli offering sandwiches and soup with a dining area where you can enjoy the food. The menu includes both meat and vegetarian options.

Pogue’s Run Grocer also personalizes the shopping experience. You are usually greeted when you enter the story and, says Produce Manager Twan Schroeder, “Where else can you walk into a grocery store and ask ‘what’s can I make for dinner tonight?’ and get some suggestions?”

When The Wind Stops Blowing

Posted On 21st July 2014
Renewable energy generated from wind and solar sources does not produce CO2, so it does not  contribute to climate change.  But what happens when the

The Farmer’s Daughter Bakery and Café