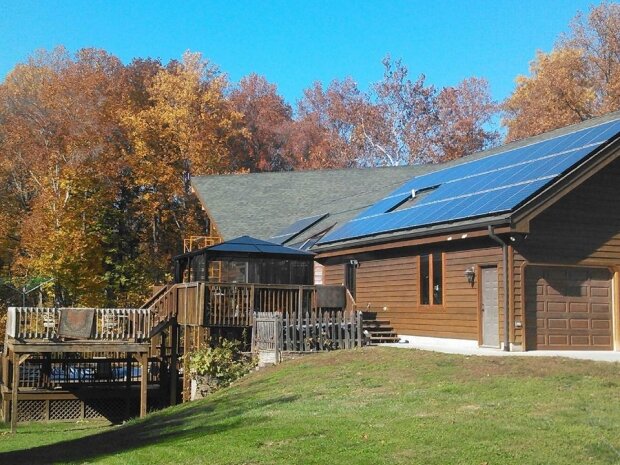 Phil Teague was a young man working for Marathon Oil. The bills were getting paid and he was earning a decent living. Then one day he learned about the Alberta tar sands oil and its potentially huge environmental impact. He decided that while the paycheck was nice, he couldn’t live with himself in his job.

Thus was born Rectify LLC. Phil with his two brothers formed the company in 2013 to promote solar energy. Based in Indianapolis and Boonville, they perform energy audits and install solar panels as well as vehicle charging stations.

Phil is now a Board Member of the Indiana Renewable Energy Association (InREA), when he’s not busy installing solar systems in the Indianapolis area or giving presentations about solar energy to many different organizations, businesses, and schools.

Rectify LLC has received the ISBDC EDGE Award in the Indianapolis Emerging business class. EDGE is an acronym for Economic Development and Growth through Entrepreneurship. It was presented June 19 by The Lt. Gov.  Sue Ellspermann.

According to Phil, solar energy not only helps fight global warming, it is cost effective as well. There are many variables involved in calculating the cost. The type of panel, its angle to the sun and degree of shade as well as the cost of electricity from each provider all factor in determining the cost efficiency of a solar system.  Additionally, there may be tax credits available that figure in the cost. Adding these factors together, solar panels can pay for themselves in as little as seven years.

Visitors to Phil’s home find a garage with solar panels on top. Inside the garage is an electric motorcycle. He says that the panels produce enough electricity to fully power the vehicle so, he rides around town leaving no carbon footprint at all. According to Phil, the quickest way to get a financial pay-off involves electric vehicles. Converting from gasoline power to sun generated power substantially reduces the cost of getting around.

Photovoltaic (PV) panels produce electricity that may be used to power your home reducing your need to purchaser power from a utility. When the panels produce more than is needed, the electricity goes out of the home to the utility. Essentially, the electric meter runs backwards and receive a credit for your excess electricity that may be used later. Duke, Indianapolis Power and Light(IPL), Vectren, Northern Indiana Public Service Co. (NIPSCO) and Indiana and Michigan Power Co. all participate in net metering.

Rectify LLC provides a product that has the potential to make a significant impact on our planet. Solar energy emits no exhaust and leaves behind no ashes or other waste. It never pollutes rivers or contaminates the earth. It’s quiet and can be cost effective. It isn’t the only answer to global warming, but it is a part of the solution.

More information about Rectify LLC may be found at www.rectifyllc.com.

Posted On 13th June 2011
Region #8. Indiana's Online Outdoor Recreation Guide has everything you need to plan an outdoor adventure in this beautiful state. (There really is a lot

Posted On 5th August 2013
Location:  334 N. Senate Av. Indianapolis, IN 46204 “The sense that you surround yourselves with things that make you think, make you experience new things

Get rid of baths
Do not take baths, take showers. You will save about half the amount of water that you would if you were taking a bath.