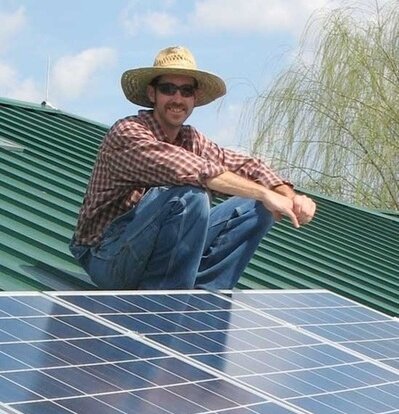 Meet Ryan Zaricki, founder extraordinaire of Whole Sun Designs in Wadesville, IN. He grew up knowing that you don’t swim in the Ohio River, you don’t eat the fish, but that never sat right with him. After attending Rose-Hulman Institute of Technology in Terre Haute, he headed out to Colorado and worked in green buildings, learning skills in sustainable trades, thinking more critically about electricity and water. He was having fun. His dad needed his help building a house, so he found himself back in Southern Indiana, and he worked for another solar contractor for awhile, moving back and forth between here and Colorado as jobs presented themselves. But then, some Indiana projects fell into his lap and that was the beginning of his own business.

He says he got into the solar business for himself, “out of necessity. I don’t like working for other people and I saw a need for people to be doing solar in this area. My first job came from an email on a listserv, someone posted something about solar and I chimed in to offer my experience from what I saw in Colorado. A person asked about differentiating between bids, I helped out with that. They finally asked if I would just bid for the job…. Happy customers led to more customers.”

There was a drastic drop in solar prices in 2011, so the time was right.

Ryan says “I just wanted to make enough money to pay my bills and student loans, but work snowballed and we had the chance to hire some employees. We’re still a small crew – I don’t really want to become a huge company.”

There have been challenges, naturally, principally the lack of education about solar energy. Letting people know that solar works and how cost effective it is is something Indiana doesn’t do particularly well. Also, incentives for solar here aren’t what they were in Colorado. Incentives can irritate utility companies to not being solar-friendly, so it’s a double edged sword.

We asked Ryan what suprises people most about investing in solar and we heard a common refrain: “It really is cost effective.” They install systems at Whole Sun Designs that are waranteed for 25 years but pay for themselves in 10 years. Bigger systems can pay for themselves in 7 years. Compared to the stock market, Ryan says, “the rates of return are comparable to major investments. The technology is user friendly, zero maintenance, people can monitor their systems on a smart phone. The features people get are really cool.”

When Whole Sun does a solar assessment, they look for some basic things. First, a sunny, open sky, is a priority. Second, utility bills tell them how much electricity you are using, which can also lead to a conversation about energy efficiency and how expensive their electricity rates are relative to other customers. Vectren customers’ rates are a bit higher which helps the solar systems pay for themselves more quickly.

Once they work through all the details, and paperwork, they can install a system in just 2-4 days.

Despite more Hoosier homes going solar, there are still some wide-spread misconceptions about solar energy and PV systems. The most common? “That it’s expensive,” Ryan says. “Put it side by side with standard utility power and it blows it out of the water.”

He’s received some crazy questions over the years, about solar flares, requests to build a concentrator on a customer’s roof to reflect more sunlight into their panels. “It was pretty gaudy, aesthetically,” he adds.

The recent California Solar Initiative study had some early indicators of a consolidating solar market. There are about 5 big national solar installers that perform roughly half of residential PV installations. Outside those companies, there are thousands of smaller companies that serve a local area, referred to as the “long tail” of solar installers. Ryan’s company Whole Sun offers something special, that the big companies can’t: creating a relationship.

“From my point of view, once I realized my path was in a home/contractor type of work, I’ve always felt kind of humbled that people let me into their homes, into the deep, dark depths of their homes even! Their utility closets. It’s kind of a sacred space. It’s unlikely you’d let strangers into these places.”

Creating a customer service-focused local business is a big priority for Whole Sun. Buying local isn’t just for food anymore, but in many ways, you can get that personal touch by going local in your energy, also. For those looking to invest in their home or business by installing solar panels, Ryan recommends that they find an educational workshop and really see what it’s all about. He recommends the Southern Indiana Renewable Energy Network (SIREN) in Bloomington or the USDA workshops geared towards farmers. “Get tied into a community that has the knowledge and once you have that, go talk to contractors in your area. The internet is a wealth of information. Find a contractor you trust.”

There is so much to look forward to with solar energy technology, recent announcements like the Tesla Power Wall and the Southern Indiana Battery Innovation Center are cool for renewable professionals like Ryan. “Batteries, off-grid systems, it’s going to be coming full circle. We are carrying around lithium ion batteries in our pockets, it’s just a matter of time before that scales up.” For power geeks like him, he adds, “inverter technology is cool.” From things like interconnected homes, smart grids, and way energy services are delivered, it’s a fascinating area to watch for him.

You can find out more about Whole Sun Designs at http://www.wholesundesigns.com/

Posted On 24th April 2014
Terre Haute resident Jane Morse remembers ABH in her parent’s garden growing up. She says it was her father’s favorite bush. As an adult when

Lessons from the Dust Bowl

Posted On 31st May 2013
It won’t be long before the corn will be knee high by the Fourth of July. As we prepare our gardens and fields for planting,

Change to fluorescent bulbs
If every house in the United States changed all of the light bulbs in their house, that would be equivalent to taking one million cars off the streets.