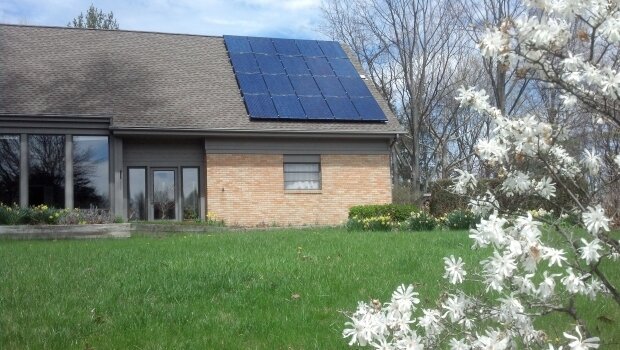 Solar is on the rise and with electricity costs on the rise also, many people are looking to make the switch. I sat down with my friend Ray Wilson, who has owned photovoltaic panels for several years, about his experience being the first wave of Hoosier solar homes.

Ray told us about how his background in agricultural engineering coupled with the 1973 oil embargo and price surging made him a bit of an energy expert at the Farm Bureau, he says “I became really interested in energy and the finite amount of it. Farmers are always interested in saving money.”

When he remodeled the second floor of his home, he designed the roof so he could place panels there eventually. Years went by, and despite a new roof, he still hadn’t put up the solar panels he’d been waiting for. A trip to Denver for a weeklong conference on renewable energy gave him the final push: he came home with now-or-never sense of commitment. There weren’t a lot of solar businesses in the area, but from his experience he just knew Johnson Mellow did solar installations. His first attempt fell through, but he followed up with a different person there and finally got started on his system. He acknowledges, “I should have shopped around but at the time there weren’t too many choices.” Now there are dozens. At the time, he paid $3.85 per watt for his 5 kW system. Ray’s church then bought a system for $2.85 per watt a few years later. Five more churches that are part of the Hoosier Interfaith Power and Light program just got a quote for $2.25 per watt recently. Ultimately, Ray said, “it’s the right thing to do, and I was prepared to do it.”

As part of his renewable energy conversion, Ray said he had saving energy and using energy more efficiently for awhile. His electric utility company, IPL, requires that you size your PV system to the power you use, so he determined the size of his system based on his past use which his electricity bills could document. He paid about $19,250 total for his system, but that was before tax credits and the rebate from his utility, so in the end it was closer to $10,000. Now, systems like his start a bit closer to $10,000, not too far off the cost of a kitchen remodel or new carpeting.

His neighborhood wasn’t too curious about the panels, until they started getting their bills with the comparison to how much power they used compared to their most efficient neighbors. Ray had initially told them he was going to install solar at a party they’d held and no one really minded, but their bills finally peaked their attention.

During the winter, Ray mentioned, solar panels make more electricity in cold, so his power production does just fine. He has a steep slope on his roof, so the snow tends to slide right off, but he’s been known to get up there and sweep it off on occasion.

This past year, rooftop solar became a hot topic during the session of the Indiana General Assembly with the introduction of HB1320, to end the state’s net-metering program and allow utilities to write all the rules for every homeowner who wants to invest in their own solar panels. Ray became an advocate for rooftop solar as an experienced early adopter and engineer. He said he learned a few things during the session, he shared that “it became more apparent that people just can’t turn off their bill, there’s a base connection cost. If you use a small amount of electricity you pay a higher price per kiloWatt hour. If you use a small amount of elec you pay a higher price per kWh. My kWH is around 12-18 cents higher under 300 kWh each month.” He was also happy to find that he was NOT costing his neighbors more for their share of the grid, in fact he was likely providing a net benefit.

Overall, he is very nothing but happy with his decision to go solar. He produces just about as much power as he uses with his system, about 17kWh per day of his 19.5kWh usage. He could increase his solar production even more if he was willing to “cut down that tree,” he says. He hopes many more Hoosiers who have a little to invest in their homes will consider going solar. It’s one of the best investments you can possibly make, even compared to saving money in interest-bearing accounts. Rooftop solar systems can also add $15,000 to the value of a home, as well.

“People need to understand it’s not complicated. They ask how I maintain my panels, well, you put them up there and they generate electricity, that’s it.”

Posted On 2nd January 2014
The way we treat our own property has an impact beyond our property lines.  The decisions we make   can have a negative impact of the

A Fresh Look at Irvington

Posted On 20th July 2015
Summer Sunday afternoons in the Irvington neighborhood of Indianapolis are special. Around 10am, tents start popping up all over the northwest corner of Ellenberger Park (5301

Do not get bottled water
Instead of bottled water get a reusable container to carry water. Also you can get a filter to make your home tap taste more like bottled water. It is definitely more cost efficient.