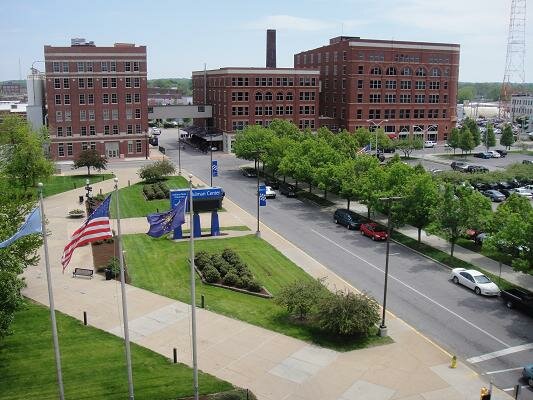 In 2012 officials within the Institute of Community Sustainability at Indiana State University arranged for a meeting with Terre Haute Mayor Duke Bennett. The meeting resulted in the placement of an unpaid Sustainability intern in the Mayor’s office.

“The Mayor was very excited and receptive in starting the conversation about sustainability at city hall,” ISU Intern Steven Flowers said.

Flowers says right now officials within city hall are looking at low hanging fruit items. Already the Mayor touts changing all of the stop lights to LED (light emitting diodes) lights. LED lights take far less power to operate than their former counterpart. Flowers is working on going from the few city employees who recycle individually in their office to expanding it to the nine fire stations and every building in the government campus. Having enough correct bins for each office is preventing this goal from being accomplished. Recently Flowers applied for a bin grant through Keep America Beautiful and hopes, if awarded, it will supply the city with enough bins to get them off to a good start.

Flowers started in his position in January and will conclude in May. His first accomplishment has been the organization of the first Mayor’s Bicycle Ride, which took place on April 17th. The bicycle ride kicked off the Earth Day festivities at ISU. There the Mayor fielded questions and opinions about the “bikeability” of Terre Haute from bicyclists. Flower’s says these types of events help encourage alternative transportation and healthier lifestyles.

“Steven is going to try and set up a regular bike ride once a month. It will be a good way for everyone to get outside talking and to enjoy the wonderful trails Terre Haute has to offer at the same time,” Terre Haute Mayor Duke Bennett said.

Flowers plans that his greatest accomplishment while interning in the Mayor’s office will be to complete a greenhouse gas inventory of Terre Haute. He will look at what greenhouse gases the city is producing and create a baseline from that information. Once a baseline is created, he would like for a round table discussion to be formed in order to discuss how we can reduce our greenhouse gas emissions and create a climate action plan for the city’s operations. As things progress the Mayor would eventually like to see a sustainability plan put in place.

“We need to make sure we are doing things as efficiently as we can to save the taxpayers’ money and we need to be out front doing some leading edge things in the realm of sustainability,” Mayor Bennett said.

Many larger cities across the U.S. have the position of Sustainability Coordinator within personnel. Mayor Bennett says it is unlikely the city would create such position as their budget continues to get cut year after year. Eventually, he thinks it will become a dual-duty role of someone already on staff.

“A lot of cities have the role of a sustainability coordinator and there is a lot of work to be done. Sustainability is something we all know about, but we don’t always think about it at the right time. It is just putting into perspective the things we are already doing. For example, if we are putting in a road, why not see if there is a way we can make it a complete street. It is really important to add that perspective in the things we are already doing,” Flowers said.

Mayor Bennett said he would like to have the consistency with working on sustainability topics and issues in the future. He hopes to partner with ISU or another local university next semester to carry the torch Flowers will leave burning.
– Jane Santucci

Posted On 14th July 2014
Some people look at a mass of wriggling earthworms and think ‘yuck’. Linda Profitt looks at these same earthworms and sees something beautiful. Linda is

Posted On 21st November 2014
By rewarding citizens in the form of Community Currency for engaging in sustainable activites, Make Change Indy is creating a sustainable ripple effect of positive

Buy rechargeable batteries
Even though it will take a good investment to buy these you will find yourself gaining it back in no time.