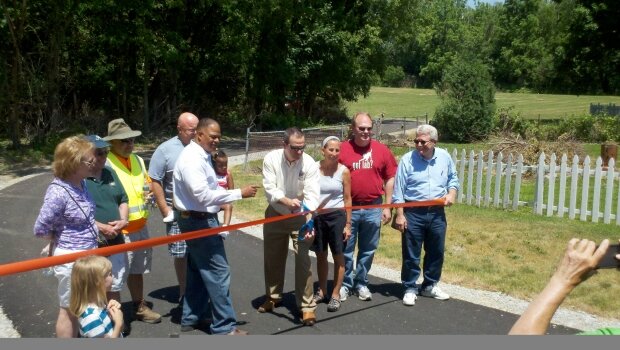 An extension to the hiking-biking trail system was opened in Anderson on May 31, 2014.  The trail now extends from the Rangeline Road on the far eastern side of town through the center of town reaching Raible Avenue on the far western side of town.  The trail follows the White River as it flows through town skirting the downtown area.  The trail also has an extension around the wetland preserve and two lakes of Shadyside Park located just north of the downtown area. 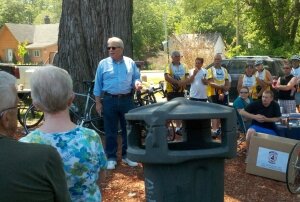 The ribbon cutting ceremony was attended by more that 50 hikers, bikers and city officials.  The local bike club was there in force sporting their emblematic T-shirts.  During the ribbon cutting event Mayor Kevin Smith recounted how the trail system began in 1984 with the construction of the boardwalk along the river in the center of town and the creation of trails around the two lakes in Shadyside Park.  Then there was a long hiatus until early this century when trail building began again .  In 2006 a Hibbs Bridge that was built in 1903 was relocated from the Coal Creek in Fountain County to Anderson and now spans the White River just about one block south of the Eisenhower Bridge as part of the trail system.  It provides a wonderful view of the river and downtown Anderson.

The once ignored White River in Anderson has now been reclaimed for the enjoyment of residents and visitors.  Click here for a trail map.

Posted On 13th June 2011
Indianapolis, Region #8 "We recognize the importance and complexity that humans bring to the system. This recognition leads us to be highly interdisciplinary in the

Posted On 5th May 2015
Nurturing the Urban Forest Sixty four cities in Indiana have achieved the title of Tree City USA. For a list of these cities click