Urban Farming for Social Mission and Good Eating Too 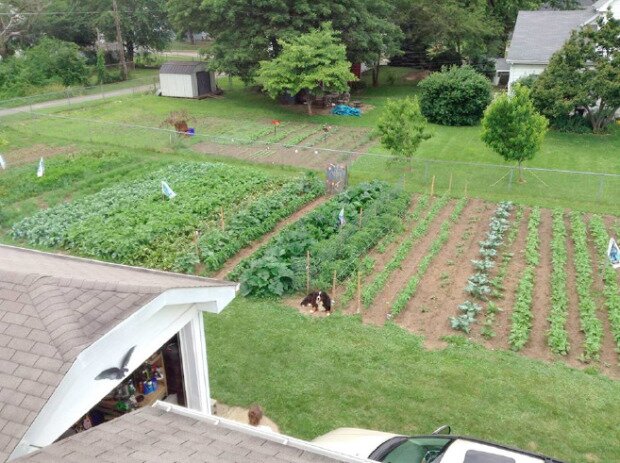 In 2012 Rick and Karen Hersberger felt a calling to be more involved in their faith community and the needs of those living in the city. So, they sold their 9 acre property west of Anderson, IN, and moved into the city. Their new property included a vacant lot next to the home which they promptly turned into an urban farm. They named their farm NERKA Faith Farm, an “acronym for our awesome family, (Niki, Eli, Rick, Karen, and Amanda)”.

They define their mission as: “To get involved in the community. Bring awareness about urban gardening. To show Christ in our lives and to love the unloveable.”

To carry out their mission they raise vegetables, without pesticides or chemicals, which they sell at low prices at farmers’ markets to those who have difficulty getting enough nutritious food. They keep the bugs under control by maintaining a small number of chickens that wander among the plants and eat the bugs. What they don’t sell they give to the Christian Center which serves the hungry, hurting and homeless in Anderson. They also share the bounty of their urban farm with neighbors, while eating well themselves.

Rick clearly enjoys talking with the children who come to find out what the farm is all about. Some of them are amazed to learn about how food grows in the ground and doesn’t just come from the grocery store.

Rick and Karen can be contacted via email at or through their Facebook page.

Garden, Learn, Give, Enjoy (at the Garden of Eat’in)

Posted On 16th September 2014
Chris Dobbins-Guill, the founder of the Garden of Eat'in says, “My primary purpose was to provide fresh fruits and vegetables for our local Kenneth Butler

Posted On 30th June 2014
Faye Lichtsinn is a remarkable young woman who decided to make her local community more sustainable before she graduates.  Only 20 years old and a

Get a reusable bag
You can not recycle plastic bags, instead get yourself a reusable bag so that you will not have to worry about carrying your necessities.