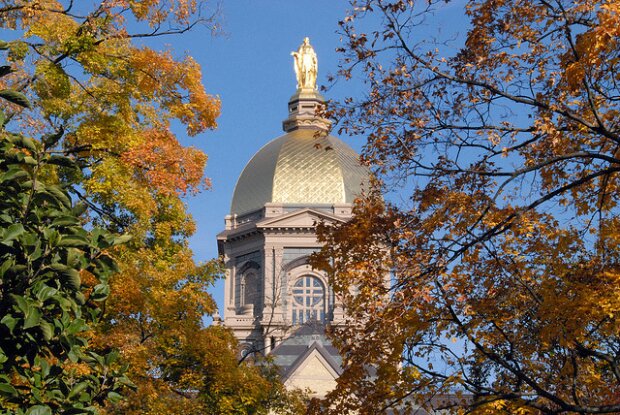 Letter to the Editor, by Garrett Blad

In a letter to the editor on June 17, 2015, the day before Pope Francis released his encyclical on climate change and human ecology, University of Notre Dame President John I. Jenkins wrote on “The pope’s challenge for global warming.” The letter attempts to calm the political rift that no doubt has been widened from the pope’s words on climate change while highlighting the imperative to act due to the impact on the world’s poor. As President Jenkins remarks, “The pope is out not to declare a side but to challenge the consciences of all of us. We should all feel the sting.”

I applaud President Jenkins for quoting the pope’s strong words from his letter to the United Nations Framework Convention on Climate Change which met in Lima Peru in December, a letter which I personally handed to the president at our meeting to discuss fossil fuel divestment this past January. I am glad to see we both believe in the meaning and urgency of the pope’s words which declare the reality of “a​clear, definitive and ineluctable ethical imperative to act.”

I welcome President Jenkins’ words at a crucial time in the climate movement. Commitments to fossil fuel divestment burgeon over $1 trillion just in the past 30 days. And the push for climate action was far from absent at Our Lady’s university. In fact, students at the University of Notre Dame have been campaigning for the past two years for the nation’s leading Catholic university to internalize the Pope’s persistent calls. Fossil Free ND, a student­driven campaign calling for Notre Dame to take aggressive action on climate change, met with the administration in January 2015 after collecting over 1,200 signatures supporting fossil fuel divestment. The group proposes removing investments in the university’s endowment from the top 200 fossil fuel corporations over the next 5 years, a tactic aimed at removing the social license of the industry most responsible for global warming. Our endowment, nearing $10 billion, is one of the largest in the nation. This fact, paired with the name recognition, alumni network, and global reach of our university, means that a divestment decision would undoubtedly curtail the political clout of the fossil fuel industry.

However, I vividly remember feeling the “sting” after the denial of our request for Notre Dame to take action on climate change. Ironically, President Jenkins denied the request largely due to the hypocritical nature of the action; he claimed that since the university currently uses fossil fuels, a decision to divest the endowment from such investments would be illogical. This argument, however, is easily diffused by the pope’s 184­page encyclical. “What would induce anyone, at this stage,” says Francis, “to hold on to power only to be remembered for their inability to take action when it was urgent and necessary to do so?”

The ‘no’ was, however, unsurprising. The denial falls in line with a series of rejected proposals and requests for Notre Dame to take bold action on climate change. As a result, this administrative pushback has thrown the university far behind its academic rivals in terms of addressing this global crisis: 14 of the top 20 universities have more aggressive carbon reduction plans than Notre Dame, the university has no

plan for carbon neutrality, possesses no large scale renewable energy source, still invests plenty in coal, oil, and natural gas corporations, and as the university expands enormously with more than $800 million in construction projects planned for the next few years, plans to reduce the significant environmental impact of this construction are less than impressive.

Fossil fuel divestment offers an exceptional opportunity for Notre Dame to change its orientation and lead on climate change. As a Catholic university we can no longer wait on the sidelines while the world’s poor and marginalized are harmed by climate change. We can, rather, we ​must​lead on the issue of climate. Divestment has worked in the past, dismantling the social license of both the tobacco industry and South African apartheid, and it can work for fossil fuels as well. “The effective struggle against global warming will only be possible with a responsible collective answer,” said Francis in a quote highlighted by President Jenkins, one that “goes beyond particular interests and behavior and is developed free of political and economic pressures.”

As an alumnus of the university, I would love nothing more than to see Notre Dame rise to the challenge of this global crisis, reclaim its moral compass, and orient itself towards the combined renewal of the earth and of humanity. Let us answer the call of Pope Francis. ​The time could not be more ripe.

Perception of Indiana: Positive and Negative

Posted On 23rd October 2014
Sustainable Indiana 2016 seeks to encourage Hoosiers by discovering, cataloging, and celebrating Hoosier based climate solutions. Part of this mission is to counteract the perception

Posted On 25th September 2013
In 2011 alone, more than 36 million tons of food waste was generated, with only four percent diverted from landfills and incinerators for composting. It

Change to fluorescent bulbs
If every house in the United States changed all of the light bulbs in their house, that would be equivalent to taking one million cars off the streets.